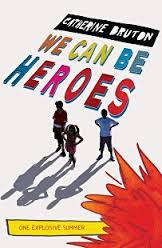 ‘We Can be Heroes’, which stars Alison Steadman and Phil Davis has its premiere at the Edinburgh Film Festival on the 24th June 2017 and many of our agency clients, academy students and their families will be appearing in two of the dramatic scenes. 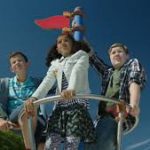 The film is based on the children’s novel of the same name by Catherine Bruton and is about a boy named Ben, who never knew his father, as he was killed in 9/11 when Ben was just a baby. Eleven years later, Ben goes to spend the summer with his grandparents, hanging out with Priti, the girl next door, and his wayward cousin, Jed. Priti is a livewire and a Muslim who gradually begins to suspect her older brother is a terrorist. The trio set out to investigate and uncover more than they expected in this family film.

Since there was so many of us involved, we hired a coach and travelled en mass, departing Swansea at 5am! A soon as we arrived at the location, we booked in and had our costumes checked and approved, before joining the cast and crew for a cooked breakfast…A great start to an exciting day!

Everyone was excited to see Alison Steadman (Abigail’s Party, Shirley Valentine, Gavin & Stacey) and Phil Davis (Quadrophenia, Sherlock, Poldark), as well as a few other well know faces, but even more excited to get checked by hair and make-up and taken to the filming location for rehearsals, which took most of the day!

For many of us, it was a new experience and a great opportunity to see how a film is made and what goes on behind the scenes. As always there were long periods of waiting time, but we didn’t care, as it gave us time to soak up the atmosphere and meet new people. Eventually, the actual takes were filmed and the clapperboard signified the end of a very long hot day.

A few days later some of us returned to Bristol to film an extra scene, this time, we filmed outside, so it provided us with another new experience and it was great to be out in the sun shine!

The entire experience was thrilling and we can’t wait to see the final cut! We hope that many of you will try and see the film when it goes on general release as we are sure you will thoroughly enjoy it and of course, you just might see some familiar faces! (Without giving too much away…one of us even gets a line!)

This was a fabulous film to be involved with and the cast and crew of Heroes Ltd. and Dan Phillips for inviting us and making us all feel so welcome!

If you are interested in being represented by our boutique agency, we’d love to hear from you. We represent children and young performers up to the age of 25, for work in theatre, film and television.