On Sunday 28th May, we travelled to Hereford to attend the much anticipated NODA awards and were not disappointed!

NODA (National Operatic Dramatic Association), nominates theatre productions both regionally and nationally in recognition of the quality of amateur theatre in and around the UK and this year we were thrilled to have been nominated not once, but four times for our 2016 production of ‘Oliver’! 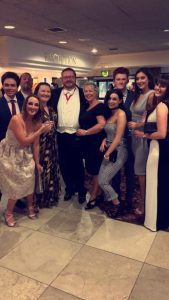 We gathered together at the Three Counties Hotel in Hereford to await the results. After a lovely  3 course meal  the nominations were announced and in true award ceremony style, the audience applauded and cheered for their favourites. (Our table giving their fair share of whoops and hollers!)

We were absolutely delighted to receive the NODA award for ‘Best Technical Performance Wales & Ireland 2016’ which is awarded in recognition of the creativity used throughout the show, including use of set, costume and lighting. The award is also a nod to the Musicality crew and backstage helpers who are instrumental in making each show successful and often don’t get the praise they deserve.

Pictured left, is Luke Spencer, NODA representative for our region, who presented the award, looking splendid in his formal attire!

The evening as always was great fun and a lovely opportunity to catch up with friends from other companies and to make new contacts and friends and ended with dancing to a live band and a few shameless selfies with the trophy! 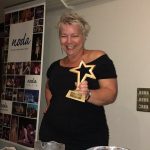 As we fast approach our 2017 production of ‘Thoroughly Modern Millie’, we can’t help wondering if we might receive some more nominations next year….why not come along and judge for yourselves…after all, we have a reputation to keep up!