We were thrilled this Summer to appear on Bay TV as part of our promotion for our production of ‘Thoroughly Modern Millie’.

On arrival at the BAY TV studio (which wasn’t easy to find!) we were greeted by the production team and taken on a tour of the Swansea based television studio. It was fascinating to see the array of cameras, monitors and lights and how it worked behind the scenes.

We were shown to the ‘green room’, where, with the other lunchtime guests we waited for the show to go live. Whilst waiting, we were able to watch the programme on air on one of the monitors which was very surreal, knowing that it was actually being filmed in the very next room! 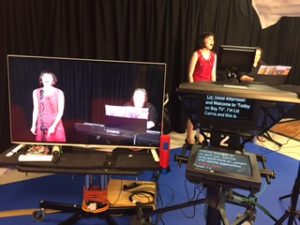 Our leading lady Elysia Coates opened our part of the show with a rendition of ‘Gimme Gimme’. It was Elysia’s first time singing live on television and she did it effortlessly; beautifully accompanied by our Musical Director, Eleri Thomas, who is experienced in television and indeed had just finished work on the Cardiff Singer of the World Competition.
Elysia was in full costume and makeup and under the heavy studio lights was extremely hot, but she managed to keep her cool and performed superbly. 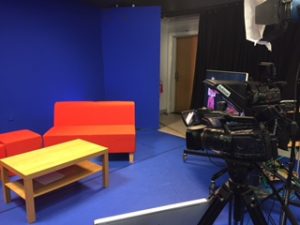 Then it was to our interview on the sofa – every bit like the ‘One Show’. There was a ‘green screen’ behind us which to the naked eye showed nothing, but for the television viewer, displayed a lovely view of Swansea Bay…The wonders of technology!

We were interviewed by showbiz journalist Keith Milward, along with Rachel Hopkins, who was new to Bay TV and  presenting on the programme for the first time. This made us all feel a little less nervous and we all had our fingers crossed for her! 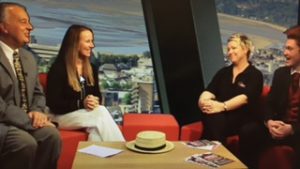 Two of us were interviewed on the sofa; Amanda Murphy, our Company Principal and Robin Haley, who played romantic lead  ‘Jimmy Smith’ in the musical. Robin, who is signed to Musicality Management, was a natural and looked very dashing on screen. He was fresh from having made a commercial with the Metropolitan Police in London, so he knew the ropes and was very relaxed. It was a lovely interview and really enjoyable to take part in.

We thank Bay TV for the opportunity to appear on their lunchtime show and very much hope that it something we can do again in the future…we always have lots to tell!

Our appearance on Bay TV is below – The Musicality section starts at 45.22: