Congratulations to Sophie Oliver who was selected from hundreds to be the Team Captain on the CBBC TV panel show ‘The Dog Ate My Homework’! 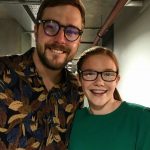 Sophie grasped the opportunity of applying for the show through Musicality Management and in her mums words, ‘had an absolute ball’!
The show is a mischievous mix of tongue-in-cheek comedy, off-the-wall questions and slapstick challenges hosted by comedian Iain Stirling who is most recently known for narrating the hit TV show ‘Love Island’. Sophie was thrilled to get a quick selfie before her days filming came to an end!
The TV experience started the day before filming, when sophie was flown from Wales to to Glasgow and chauffeured to BBC, where she was given a tour of the studios including the busy newsrooms which she found fascinating! 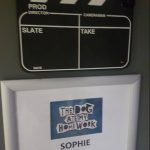 The filming day itself was super exciting, as much to Sophie’s surprise, she had her own dressing room and here is a photo to prove it…Yes, she even had her name on the door!
Then it was time for wardrobe, hair and make up, (which we are guessing was one of Sophies favourite parts of the day) before taking a short break.
Sophie was then introduced to the others on her team who included TV presenter Lauren Layfield and Funmbi Omotayo, a stand up comedian. 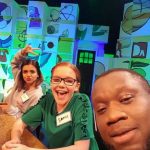 On the opposing team were Abdul (Team Captain), Dr Ranj, who is the resident doctor on ‘This Morning’ and stand up comedian Ivo Graham.
After a full brief, Sophie was taken to the set for a rehearsal, before grabbing some food from the BBC canteen which was eaten in the ‘Green Room’.
At 6pm, it was time to get microphones fitted and excitement began to build as the studio audience started to arrive. Finally, at 6.30 it was show time! 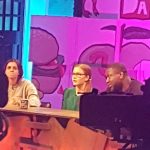 The first three three rounds were filmed and lots of fun was had, although we won’t tell you exactly what happened as we don’t want to spoil any surprises! After a short break, the final two rounds were filmed and after three exhausting, but fun filled hours, filming was ‘wrapped’.
Sophie enjoyed the whole experience and thanks CBBC and everyone involved with ‘The Dog Ate My Homework’, for welcoming her and looking after her so well.

Did Sophie’s team win? Well we shall just have to wait until the show is aired in the New Year before finding out, as Sophie’s lips are sealed!

Sophie is represented by Musicality Management and if you would like the chance of getting involved in TV and film, Click here to find out more!