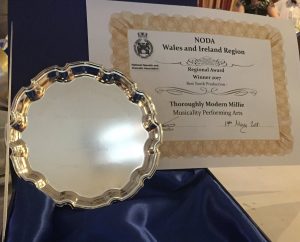 We are absolutely thrilled to announce that we have won the NODA award for ‘Best Youth Production in Wales & Ireland’ for our production of ‘Thoroughly Modern Millie’ in 2017. The show directed by Dan Phillips was performed at the Princess Royal Theatre last July and was in fact nominated for 7 awards in total.

Not only did Musicality win this prestigious award, but we were also invited to perform at the ceremony which was a huge honour. The company performed by request, ‘When You’re an Addams’ from The Addams Family (which won best production for our district in 2015) and also numbers from our forthcoming show in July:

Money from Cabaret, Impossible Dream from The Man of La Mancha and This is Me from The Greatest Showman 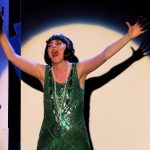 As well as our four company numbers, we were treated to two solos from Zoe Way, who sang ‘Stop Moving the Line’ from the hit TV series ‘Smash’ and Elysia Coates (pictured left) who performed ‘Gimme Gimme’ from our award winning show ‘Millie’ in which she played the leading lady! Both ladies performed to an incredibly high standard and had standing ovations from the audience which was made up of theatre companies from across Wales and Ireland.Over 300 we understand and all of whom, were super supportive. 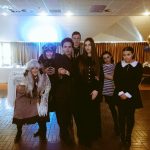 The ceremony and indeed whole weekend was a huge success and heaps of fun for the 40 of us who attended. Before the ceremony, we all attended workshops arranged by NODA which included a Musical Theatre workshop (songs by Sondheim) and a Drama. workshop, led by the current President of NODA, Nick Lawrence.

We even had a two hour break in which we were able to enjoy a quick peek at the royal wedding whilst enjoying a light lunch provided by NODA. 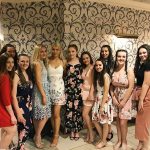 The ceremony itself was great fun and after the awards and our performances, we were treated to a Tina Turner tribute act, where we could all dance and let our hair down.

The company changed out of their costumes into some fabulous evening wear (all looking gorgeous) and continued to celebrate into the small hours! (Some longer than others!!!)

We returned to Gorseinon on Sunday, having as promised, announced our 2019 production…

Keep your eyes peeled for more information on the next production which will be performed at The Princess Royal Theatre in Port Talbot, 21-23 March 2019.

Auditions for this will be taking place in September and we already have a waiting list in place for those interested in joining us…We are particularly eager to welcome boys of senior school and college age who will be heavily used in the production and will be able to audition for lead roles.

CLICK HERE TO BOOK TICKETS FOR OUR NEXT SHOW