Musicality Academy student, Josie Daniel has recently enjoyed a week at the prestigious Tring Park School of Performing Arts in Hertfordshire and here, she tells us all about it…

During my six-week school holidays, I was lucky enough to spend  a week at Tring Park School in Hertfordshire.

I was so excited as we drove up the driveway to the impressive building on Sunday 12th August…What would the week have in store? Very soon, I met my roommate for the week, who was lovely and that was a huge relief! I knew from that moment that It was going to be such a fun experience and I couldn’t wait to get started!

Classes started the following day and we were put into three groups, before meeting the teachers that we would be working with. I was so excited to learn I’d be working with Richard Reynard who recently played Eddie in ‘Blood Brothers’ in the West End and Simona Bird, who is currently the Musical Director for ‘Heathers the Musical’ in London. I was particularly thrilled to meet Simona, as I am a huge fan of ‘Heathers’ and had recently been to see my friend and former Musicality student, Alex James-Hatton in it! I couldn’t believe I was going to be working with her. I thoroughly enjoyed working with all the teachers on the course as they were so helpful and supportive. 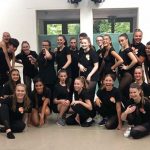 The week was spent preparing for a final performance piece that we would show to our parents at the end of the course, so we had to learn songs, dances and scenes. All of the students were so talented and we  became friends very quickly.

The week that I spent at Tring Park was a truly amazing experience and I learnt so much that will help me in the future.  I definitely recommend the course to any young person who is interested in Musical Theatre, because it can give you some great connections with professionals and other people your age who love Musical Theatre. I found that I came away from the course with a new perspective on how to approach things, that I previously found challenging and also I found the course to be a huge confidence boost.

Josie is 15 years old and is a member of our Senior Company at Musicality Academy. She is one of many students who is looking towards a career in Musical Theatre. In order to ensure that she is fully prepared for drama school auditions in a few years time, she also takes Ballet, Tap and Contemporary classes with us and has extra singing lessons with our Musical Director, Eleri Thomas.

Thanks Josie for a little insight into your summer School experience…A dedicated triple threat student who is sure to go far.

We look forward to updating you with some more student news soon, as there are some
exciting projects in progress!