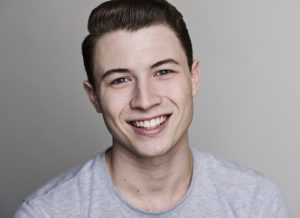 Alex, is the first of our Musicality Academy Alumni to perform in London’s West End in a leading role, as he takes on the role of Elder Price in The Book of Mormon.

Alex played the role after being flown over from Switzerland, where he is currently ‘First Cover Elder Price’ in the UK/European tour of The Book of Mormon and that same night, he was to star in London’s West End production!

The Race is On
It was all systems go to ensure Musicality was there to see him and fortunately our Musical Director, Eleri Thomas  and Musicality friend and guest director, Dan Phillips (Director Dan) were able to get there at short notice!

Dream Come True
Alex makes no secret that whilst training in Musical Theatre, his dream role has always been ‘Elder Price’ in The Book of Mormon, and he has been so fortunate to have played this role numerous times, whilst on tour this year in Holland, Germany and Denmark. However, to play the lead role in the ‘West End’ was literally a dream come true and Alex called us the morning after, to let us know how it went.

It was a crazy day, as my flight was only at midday, but I arrived in time to have a quick look at the stage and pick up some new choreography…then before I knew it, it was time to get ready!

I’d be lying to say I wasn’t nervous…I couldn’t really believe it was happening – Its probably a good job I didn’t have too much time to think about it. The London cast made me feel very welcome, especially Tom Xander who plays Elder Cunningham and to know that some people had managed to come at short notice to support me was really special. What an experience!

Musicality Academy
At Musicality Academy, our aim is to create a passion for the performing arts and for Musical Theatre in particular. We were super proud of Alex getting into The Arts Educational Schools, London  to continue his training in 2015, and then last year, to see Alex in ‘Heathers’ in the West End was another highlight. But this is the icing on the cake and we are sure that Alex will be an inspiration to our current students, who can see that with passion and drive, anything is possible!