Musicality pupil, Danny Spillets found himself featured in a recent episode of TiPiNi this month. The S4C children’s programme
was aired on the 9th November. 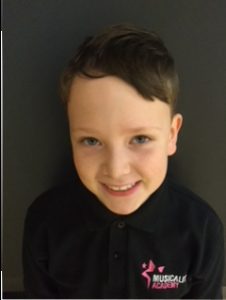 S4C’s TiPiNi (Our TeePee) is produced by Nia Ceidiog who is most famous for writing Fireman Sam!  She now travels all over Wales rediscovering stories of real Welsh heroes and Welsh history. Nia involves children from each local area and finds her stars by visiting Welsh medium schools. Danny was chosen with some friends from YGG Pontybrenin after chatting with Nia in the school hall. The filming took place over 3 days. and included, a day out in Penllergaer Woods with the main characters Kizzy and Kai to tell the story of John Dilwyn Llewellyn who lived there and used an early camera to take the first ever photograph of the moon!

They spent time exploring the beautiful woods and try out some yoga which is one of Nia’s other passions. Danny’s whole class got to join in the fun as they were all taken to Cardiff to film the scenes in the Teepee. Finally when the editing was complete a last meeting with Nia Ceidiog for Danny to record the voice over for his episode.

Danny tells us that he really enjoyed the whole experience and was thrilled to be chosen, especially to do the voiceover!

Danny has been in Musicality since he was 5 and the experience, skills and confidence he has gained enabled him to stand out. He was thrilled to be picked and it has definitely made him even keener to keep working hard on Monday nights at Musicality. Thanks to all the wonderful staff who have helped him.

INTERESTED IN TV & FILM – WHY NOT JOIN OUR MANAGEMENT AGENCY