On Monday 5th February, it was a taste of ‘Lights, Camera, Action!’
for our youth company who were treated to a fabulous workshop
on TV and Film camera skills by the talented Hoosh Arabi. 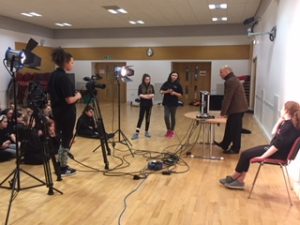 Hoosh set up lights and monitors to replicate a TV studio and the students were able to sit in front of the camera and learn skills such as not looking directly at the camera whilst being interviewed…Which was a lot more difficult than they at first imagined! The students took turns sitting in the ‘hot’ seat and couldn’t resist giving us a wave when they saw themselves on the TV screen!

Some of the students had a chance of being the director and camera operator and had fun switching the camera from the shot of the person in front of the camera to a shot of the waving audience. 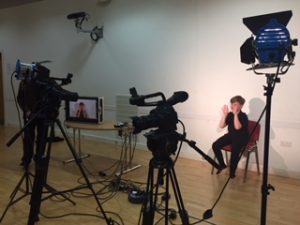 Hoosh described how CGI worked and we looked at Green screen technology. We learned that you can also have ‘black’ screen, where nearly everything black disappears on the screen. This technology made the students in front of the camera practically disappear and made them look as if their head was floating!

This special workshop was set up to introduce students to the technical side of performing arts and was really useful for those who are represented by our agency and who attend TV and film castings.

The workshop was a big hit and the children thoroughly enjoyed. A massive thank you to Hoosh who was brilliant with the students and made the
workshop such fun!

Read more about our Management Agency.

Learn more about our Youth Company and our classes at the Academy.