At the end of our Spring Term, we were delighted to welcome Nicola Smith to Musicality who spent 4 weeks with both our youth and senior companies. 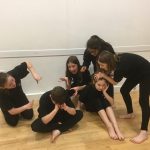 Nicola, who until recently was the Chief Examiner for Drama in the U.K, studied Drama and Directing in both Wales and America and is still a teacher of Drama in Swansea.

The idea of the workshops was to introduce our students to new techniques and particularly that of Stanislavsky and Brecht. As a predominatly musical theatre based company, most of our time concentrates on the singing and dancing aspects of a musical, so it was fantastic to dedicate this time to acting alone. 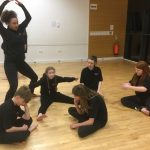 The youth group worked on a selection of ‘Grimms Fairy Tales’…fairy tales with a twist and were directed to ensure that everyone had speaking lines. The Youth company performed their pieces to an audience on the fourth week, to much applause and appreciation. The students worked in small groups and looked at how to interact with each other physically. They looked at their characters in detail…even down to how they breathe and walk.

Our senior company worked on a short piece called ‘Find Me’, which was based on a true story about a girl called Verity Taylor and the injustice of mental health. This was a hard hitting piece that displayed the techniques of Stanislavsky excellently and was quite a departure for our students, who all had lines. The short play was performed to parents and friends on the fourth week and the feedback was excellent.

This was a really accomplished piece with a lot of talent on display.

I was surprised at the high standard of the acting and I didn’t expect it to be so hard hitting. I was fighting back the tears.

I can’t believe the performance was put together in just a couple of weeks, it was so professional!

We thoroughly enjoyed this short departure from singing and dancing and thank Nicola, who did a tremendous job with our students and we look forward to working with her again in the near future…watch this space!

FIND OUT MORE ABOUT OUR MUSICAL THEATRE CLASSES